This is the first year that ICA has awarded an ICA Excellence Award. The purpose is for ICA to recognize individuals who have achieved excellence in furthering the values and mission of ICA.

ICA received a number of outstanding nominations and we are grateful to both the nominators and those nominated for presenting them to the Selection Panel. 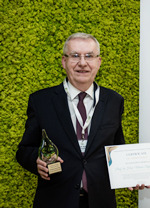 As you might expect, the Panel were challenged in selecting the award winner and the decision was not easy. None the less, the ICA Board approved the recommendation that the 2022 ICA Excellence Award is presented to Professor Dr. hab. Marek Stefan Szyndel from Warsaw University of Life Sciences.

As described in the Call for Nominations the Panel considered those nominated against four criteria that are based on the ICA Vision, Mission, and Essentials who have demonstrated excellence by:

1. Providing thought leadership, inspiration and the contribution of new knowledge through research and/or innovation for the European and global sustainable circular bioeconomy and society, and/or;

2. Enhancing education in the specific areas relevant to ICA and more generally in the areas of the bioeconomy and society, and/or;

3. Developing cooperation through contributing to platforms, joint learning, outreach and/or sharing experiences and understanding among European colleagues, and/or;

4. Achieving impact and relevance with specific reference to the ICA values and mission.

Marek Szyndel's academic work is in the area of horticulture and plant virology. He is a specialist in the field of immunoelectron-microscopy techniques for the detection and identification of plant viruses and in the study of serological relationships of viruses, and the biological and molecular variability of plant viruses. He has published over 100 peer reviewed papers, a number of text books, and has published the sequences of both nucleotides and proteins of plant viruses in international data bases.

Prof Szyndel was and is still highly involved in developing joint-learning programs and has shared his experiences among European colleagues by publishing e-tool books for students and teachers. Additionally, he actively participates in webinars and workshops of EUA and various European Universities, whose main topics are related to the development and changes in higher education, especially in the disciplines related to agriculture and life sciences. He has supervised many PhD and MSc students including one type of ‘co-tutelle’ which was the basis for the award of PhD degrees at the University of Louis Pasteur in the Strasbourg, France and at Warsaw University of Life Sciences, Poland. He was scientific supervisor of 22 research projects of students from the Erasmus+ Program.
As a Vice-rector of International Cooperation, he was strongly involved in academic activities at the university level and beyond. He was an active member of international project consortia and was a chairman of the central committee of the “Olympic Games of Agricultural Knowledge and Skills (2018-2021) that included several thousand students from secondary schools.

The ICA Excellence Award panellists appreciate Prof. Szyndel's lifetime achievements in leadership. He has been extremely active in national academic councils and in organising international student conferences. He has received many academic and university awards during his life-time including the Golden Cross of Merit awarded to him by the President of Poland and was recently elected as a member of the Central Council of Science and Higher Education in Poland. He has made active contributions in developing networks for the European and global sustainable bioeconomy and society. He carried out this work parallel to his tenure as a member of the management Board of the Euro league for Life Sciences -ELLS (2012-2016), President of ICA between 2016 and 2020 and during his service to the management board of Regional Network for Central and South Eastern Europe (CASEE) from 2013 to 2021.

The ICA Board is delighted to recognise Professor Dr. hab. Marek Stefan Szyndel as the ICA Excellence Award winner for 2022.